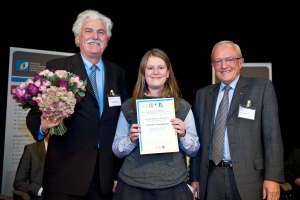 A former Max Weber fellow has received the Best Thesis Award by the Franco-German University, for her work “Europeanization of party competition in France, German and the UK (1986-2009)”.

Isabelle Guinaudeau defended her thesis in 2011, before spending a year at the EUI as a fellow where she researched French law-making in taxation, nuclear energy and intellectual property regulation.

The award was presented at the French embassy in Berlin on 29 November. It is supported by numerous organisations including the Rotary Club Berlin and the Rotary Club Paris.