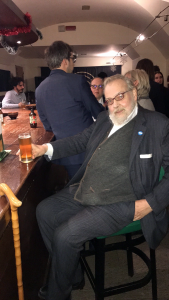 Iain Fraser in his last visit to the Fiasco Social Club

Generations of researchers, faculty, fellows and staff mourn the passing of Iain Fraser. Iain, erudite translator and scholar, joined the EUI in late 1976 as one of its official translators. He was beloved by many, and will be fondly remembered for his wit and readiness to converse–often over a drink in Bar Fiasco–on everything from poetry to politics. Iain was also responsible for the Institute’s original emblem, a shield including the emblem of the European Union, a book, the tower and cloister of the Badia Fiesolana, and the European motto Unitas in diversitate written below.

Iain Fraser was probably best known at the Institute as the man who spoke seventeen languages. ‘It’s not so hard after the first seven’, was one of his throwaway lines. Fittingly he was the EUI’s principal translator but in a way that went beyond the obvious meaning of those words. In the 1980s, Florence was a somewhat closed and provincial place, charming but not exactly welcoming and the EUI was rather cut off from Florence. Iain transcended these divides and shared his vast international experience with young researchers for whom Florence might have been their first time living abroad, trying to manage everyday life in a new language. He was extraordinarily well-travelled and well-read (always in the original language, of course) with an enormous gusto for life. Nothing human was alien to him. Last year in the Library he was looking for an historical dictionary of the Maltese language as he didn’t find our standard four-volume English-Maltese one sufficient for his purposes.

It is not known what language the angels speak amongst themselves but it is certain that Iain has already mastered its grammar and vocabulary and is forcefully putting the case for Scottish independence in some celestial Bar Fiasco. As we say in Irish (which Iain also spoke and rather better than I)  Ní bheidh a leithéid ann arís – his like will not be seen again.

The Institute extends its sincere condolences to Iain’s wife Monika, and their children Antonia, Angus, Lily and Alexander.