New arrivals at the Department of History and Civilization

Three new professors have joined the Department of History and Civilization this September. 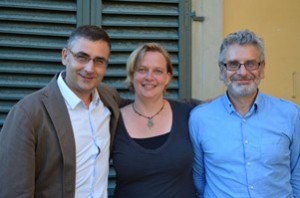 Alexander Etkind has taken up the Mickhail M. Bakhtin Chair in Russia-Europe Relations. Professor Etkind’s theses of research include European intellectual history, memory studies, and Russian politics, novel and film in the 21st century. He arrives at the EUI having previously been at the University of Cambridge.

Regina Grafe has joined the EUI from Northwestern University as the Professor of Early Modern History of Europe. Her research themes include early modern history of the Hispanic world, global economic and social history and the history of state and empire building. Professor Grafe is currently involved in two research projects; A Stakeholder Empire: The political economy of Spanish rule in the eighteenth century Americas, and Institutional Diversity and European Expansion, 1450 – 1850.

Stéphan Van Damme is the new Professor of History of Science. His research includes early modern Europe, comparative history of science, cultural history of the enlightenment, and environmental history. Professor Van Damme was previously at Science Po, in Paris.