New volume out by Patrizia Guarnieri 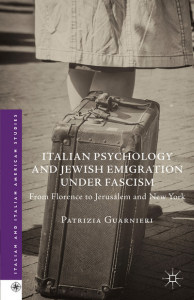 Patrizia Guarnieri, who was a Jean Monnet Fellow at the EUI in 1998, writes to announce the publication of her book Italian psychology and Jewish emigration under fascism: from Florence to Jerusalem and New York with Palgrave Macmillan, earlier this year.

The book details the drama of Jewish Italian scholars who were forced to emigrate following Italy’s 1938 racial laws, which banned their books and barred them from public office and higher education.  In particular, she examines academics in the field of psychology, at the time a marginalized field. Renata Calabresi and Enzo Bonaventura are two of her main cases. The former emigrated to the United States and the latter, to Palestine. Neither ever returned.

Guarnieri is Professor of Contemporary History at the University of Florence.