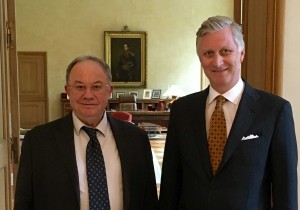 On 18 April, Olivier Roy, Joint Professor at the RSCAS and in SPS,  was received by King Philippe of Belgium, in Brussels, in a private appointment.

As the King’s staff explained in the January invitation, Professor Roy’s work and reactions in the press following the terrorist attacks in Paris had caught the interest of the King, who also had expressed his appreciation of the collection of Roy’s essays La peur de l’islam (Le Monde, l’Aube), published with Le Monde journalist  Nicolas Truong last September.

During the visit Professor Roy explained his views on the political situation in the Middle-East, and the issue of jihad.