Onwards and upwards: the EUI celebrates its graduates 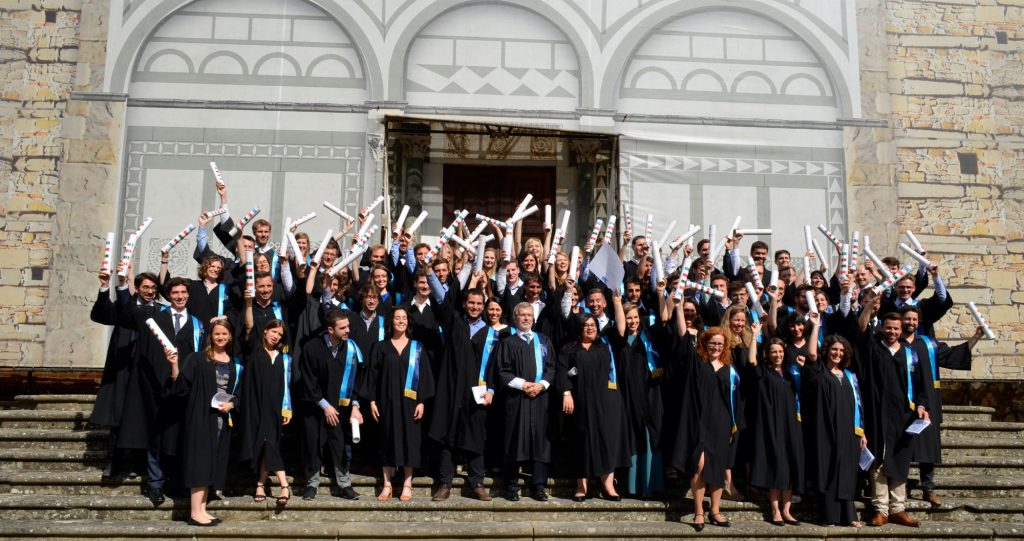 The European University Institute celebrated the achievements of this year’s PhD and LLM graduates at the annual conferring ceremony on Friday. Sixty-five PhD, two LLM and two Honoris Causa degrees were conferred during the two-hour ceremony. Four EUI Alumni also received prizes for their exceptional research. ‘Getting here is no small feat, but this time was not only about blood, sweat and tears,’ EUI President Renaud Dehousse said, addressing the graduates. Aside from intellectual endeavours, a PhD is shaped by the Institute’s unique culture, community and ‘the many beautiful things that Florence and Tuscany have to offer.’

Ozden Mercan, a researcher from Turkey, agreed strongly with this sentiment. She received her PhD from the Department of History and Civilisation on Friday after defending her thesis in May. As an early modern historian working on diplomatic relations between Genoa, Florence and the Ottoman Empire, ‘the EUI was the perfect place – it is the heart of Renaissance history,’ she said. With four years of funding, Ozden says she was able to pursue opportunities she would not have had elsewhere. ‘I was able to conduct research in Paris and Istanbul,’ she told EUI Life. ‘I have learned Italian and read sixteenth-century sources in Genoa, Florence and Venice,’ she said enthusiastically.

Historically, Florence was a city of trade, commerce and intellectual rigour. For this year’s graduates, the EUI maintains the city’s reputation for intellectual exchange. Francois Delerue came to Florence from the Sorbonne to pursue his interest in cyber security. ‘I wanted to join the dots between technology and law,’ he said, adding that no other scholars were working on the topic at the EUI when he applied. Yet for Delerue, this was not a drawback. ‘Coming to the EUI with our own national traditions, we all had to learn new approaches,’ he explained. This makes it ‘a very innovative place for study,’ he said.

Ozden Mercan also benefitted from the interdisciplinary diversity of EUI researchers. ‘There were no Ottoman historians here, but this actually was not a negative thing. The European knowledge complemented my Ottoman knowledge,’ Mercan explained. ‘It was easy for me to adapt even though  I came from a  different culture. You don’t feel like a stranger here,’ she said. 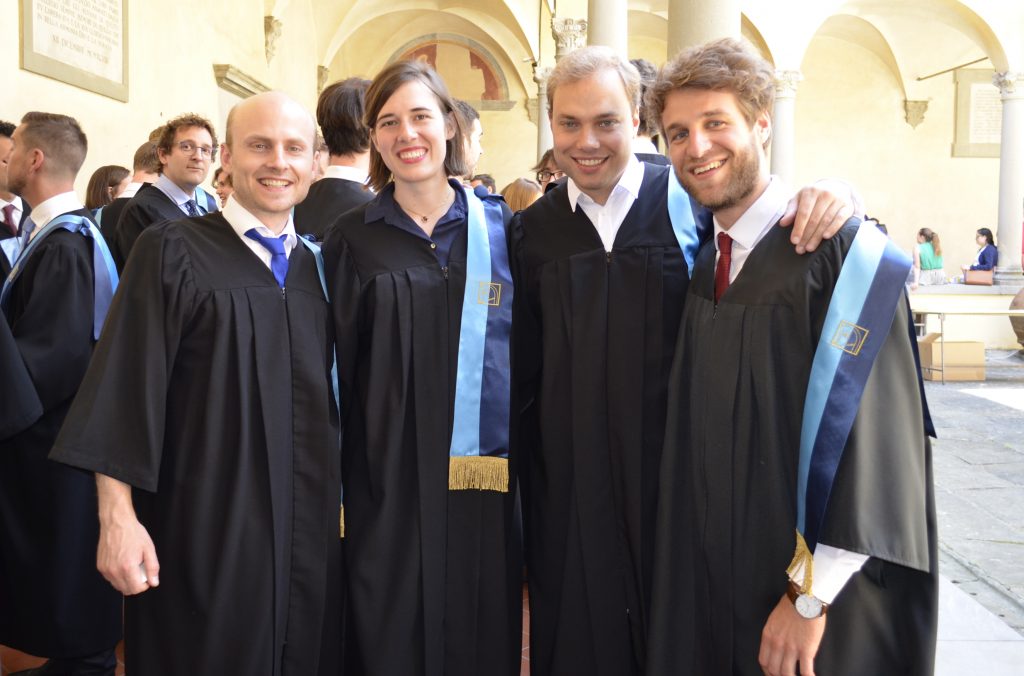 Graduates from the Department of SPS

While studying his Masters at the LSE, Davide Morisi (SPS) also began to think that the EUI ‘looked like the ideal place’ to pursue his interest in the causal effects of information. ‘To be back in Italy but in an international environment of the highest quality,’ was very appealing, he said. On arriving at the EUI to begin his thesis on the influence of information in political campaigns, Morisi realised ‘the connection to the professors was also outstanding.’ His supervisors, Diego Gambetta and Alex Trechsel, quickly became ‘intellectual mentors’. Even after leaving Florence, the EUI’s tight-knit and collaborative environment has continued to positively impact on Morisi’s career. ‘The EUI gave me a solid background and a wide international network. I’m co-authoring papers with former EUI colleagues who are now at other universities. The EUI is really special in this sense,’ he said.

During the ceremony itself, graduating PhD Researcher Elie Michel took the opportunity to deliver a philosophical ‘salute’ which echoed the sentiments of his peers and colleagues. ‘Our university fosters a true sense of academic citizenship because it is interdisciplinary, far less hierarchical than most doctoral schools and because it encourages you to truly engage with each other,’ he reflected. ‘Few abbeys would meet the humanist aspirations of the Renaissance as our Badia Fiesolana does today.’

At his first Conferring Ceremony as President of the EUI, Professor Dehousse awarded two honorary degrees to András Sajó, a Hungarian academic lawyer and judge, and Claudia Goldin, an economic historian and a labour economist. Claudia Goldin said she was particularly moved that the institution which bestowed this honour on her was the EUI. ‘I am honoured to have been chosen by a faculty that stands for ideals that are needed today, just as they were at the [Europe’s] conception in 1948,’ she said. The EUI is ‘an institution of increasing importance in times of nationalism,’ she said, adding a word of advice to all those gathered: ‘Academic understanding is a key to unity.’ 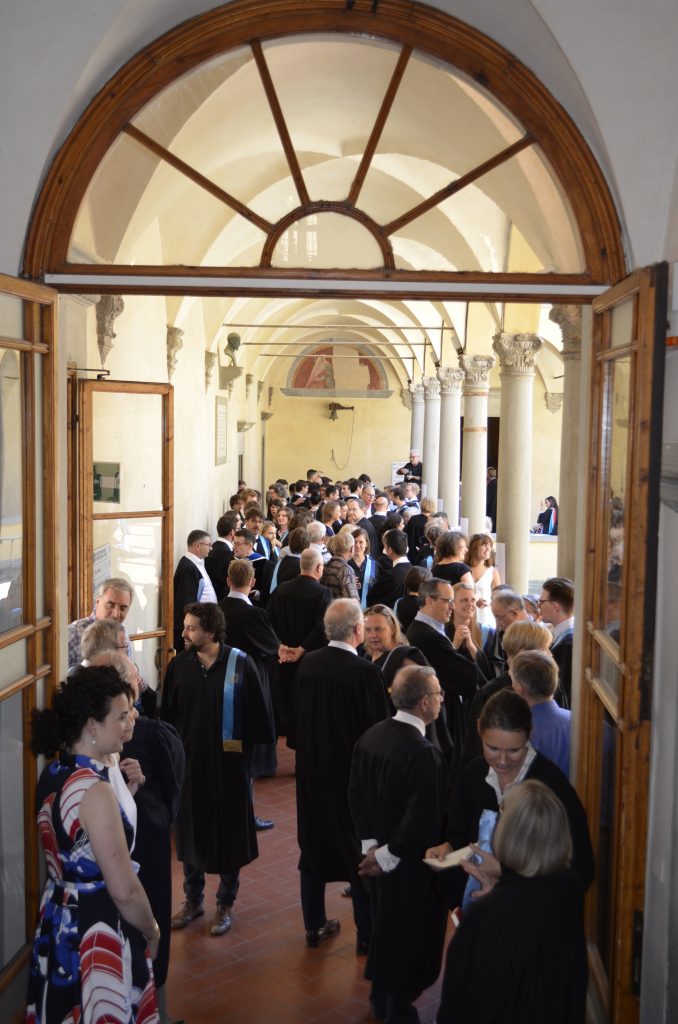 ‘We will always be happy to see you return here but equally importantly, we want you to think of yourself as an EUI ambassador wherever you are’ – Professor Dehousse

Sajó used his speech to reassert the importance of values in an academic culture which tends to deconstruct, ‘putting values into a laboratory of objective analysis.’ Though such analysis has a role, ‘we have to stand for those values that are dear to constitutionalism and human rights, the tools and the instruments to fight a despotism that is quite likely to emerge,’ he warned. Stressing that some rights are not preferences but fundamental values, Sajó argued that part of the current crisis is due to intellectual and bureaucratic complacency. In academia, ‘there is a syndrome of it can’t happen here,’ he said, but ‘it is fundamental not to be complacent.’ ‘Ivory towers are needed,’ he said, addressing the new doctors of Economics, Political Science, History and Law, ‘but what you do in the ivory tower cannot be without responsibilities.’

Professor Dehousse also spoke of the duty that will accompany graduates of the Institute as they move forwards. ‘Do not forget that you have a huge debt. It is not a financial, but a moral one,’ he said. ‘We will always be happy to see you return here. But equally importantly, we want you to think of yourself as an EUI ambassador wherever you are,’ he told the graduates. ‘My request is that you share with others some of what you have gained here.’

According to the testaments of this year’s graduating researchers, there is much to gain from the EUI’s PhD programme. Yet, concluding his speech with a strongly applauded statement expressing solidarity with the Central European University, Dr Elie Michel clearly felt his peers also have much they can offer. ‘Precisely because they form communities of people who think freely…in Budapest they want to silence academics,’ he said. ‘In many ways, our idea of university is under threat, be it by nationalist autocrats or lunatics who want to reduce scientific truths to alternative facts.’

‘Dear friends, I trust our common experience at the EUI has given us the confidence to stand against these threats,’ he said, concluding his salute to peers, colleagues and friends, ‘When I look around me, at this new generation of academics, I can only be an optimist.’