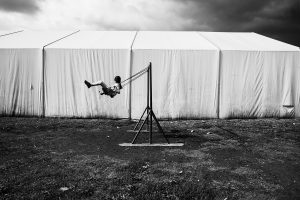 Mario Badagliacca’s ‘The Game’ paints an emotive picture of migrants in the EU’s Balkan borderlands.

‘The Game’. There is a wry irony in the name that migrants in Europe’s Balkan borderlands have given to their attempts to leave their homes and forge new lives in the EU. When the migrant crisis started to make headlines in 2015, newspapers and televisions were awash with harrowing pictures of scores of migrants from across the Middle East and southern Asia attempting to cross the border into Serbia, Hungary and neighbouring countries. Yet, as the years have passed, the spotlight has shifted. It is now more common to see media coverage of the migrant routes across the Mediterranean from North Africa than of people still trying to enter Europe through the Balkans.

That shift in attention was what drove Mario Badagliacca, a Sicilian photographer, to travel to these eastern fringes of the European Union. Though the cameras have moved on, thousands are still playing ‘The Game’, risking everything on a daily basis in a frantic attempt to reach the EU. Badagliacca’s photographs, currently on display at the EUI in the main cloister of the Badia, paint a picture of a life fraught with danger and distress, yet tinged with hope that a better life might be just a roll of the dice away.

‘I was curious to see the aftermath of the efforts of Frontex and the EU to close the Balkan route,’ Badagliacca told EUI Life last week, his visit to the EUI coordinated to coincide with a conference on ‘The Ethics of Migration’ hosted by the SPS Department and the Schuman. ‘I wanted to understand how these people live and how they survive in such hard conditions,’ he explained. 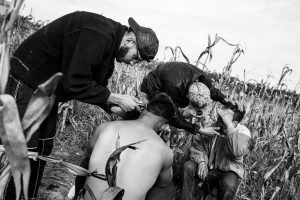 Migrants will spend up to a year on Europe’s eastern fringes, as they try to cross to the EU.

Most of the migrants Badagliacca met (he spent around twelve weeks in the region across three separate trips), a majority of whom apparently travelled from Afghanistan, live in temporary refugee shelters and squats, or in the ‘jungle’ – wooded areas along  the Serbian border. Despite their circumstances, Badagliacca describes the atmosphere among the migrant communities as ‘energetic and positive’, particularly among the many children and unaccompanied minors living there. ‘They started to play, to make selfies, asking me for good photos for Facebook,’ he reflects.

The impression that, despite the circumstances, migrants playing ‘The Game’ are trying their best to live ordinary lives is eminently clear from studying Badagliacca’s photographs. One image shows a group of young Afghan men dancing at an impromptu disco set up by international volunteers, while others depict men having their heads shaved and a girl playing on a swing.

Those living in these communities will make up to twenty attempts to cross the border each year, but Badagliacca’s skill is in capturing the spaces in between. In doing so, he hopes to engage and educate a wide audience about what is happening in the Balkan borderlands, and to remind people that, although the spotlight may have shifted, ‘The Game’ is still afoot.

Mario Badagliacca’s photographs will be on display in the main cloister of the Badia Fiesolana until the end of January. You can read more about him and his work here.