Portugal’s minister of finance at the EUI 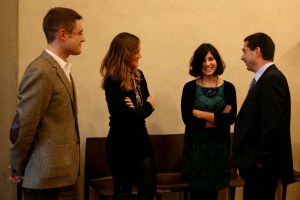 The minister spoke on European politics during the crisis, drawing on the historical background to financial union in Europe and discussing current changes within national governments and Portugal’s ambitions for 2013.

Gaspar was joined by EUI Professor Adrienne Héritier, who argued that a solution must be negotiated at the political level rather than imposed, and Professor Ramon Marimon, who delivered a poem on the topic.

The minister also met with Portuguese researchers for lunch before the lecture.