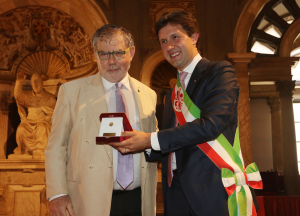 The mayor of the city of Florence, Dario Nardella, has named EUI President JHH Weiler as one of the 2016 recipients of its civic prize ‘Fiorino d’Oro della citta di Firenze’.

The prize recognizes individuals who have brought honour to the city of Florence and its institutions, both at the national and international levels, thanks to their distinguished contributions in the areas of culture, the arts, work, politics, service, philanthropy, sport, or the international sphere.

The award recipients are honoured in Palazzo Vecchio and receive a certificate recognizing their specific contributions to the city and a golden replica of a fourteenth-century florin, which bears the Florentine fleur-de-lis on one side and the likeness of San Giovanni Battista, Florence’s patron saint, on the other.