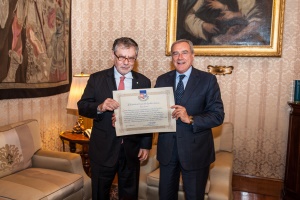 During the meeting, Professor Weiler described the academic and research activities carried out at the EUI on the process of European integration and related policies.  He also extended the EUI’s profound gratitude to the Italian Republic for its invaluable patronage in providing the buildings and locations necessary for the Institute to carry out its work.

President Grasso congratulated Professor Weiler for the high academic value of the research and teaching carried out at the EUI, and expressed his hopes for greater interaction between the worlds of academic research and government.