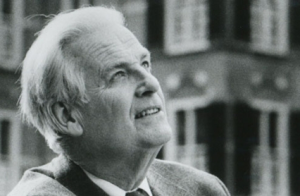 Professor Hans Daalder passed away in the Hague on the 4th of April 2016 at the age of 88. Beyond his intellectual and academic achievements, he deserves a special tribute in EUI Life for his role as a founder of the EUI and of its department of Political and Social Sciences.

As a political scientist he was one of the first graduates of the ‘Seventh Faculty’ (the Political-Social Faculty) of the then Municipal College (later University of Amsterdam) in Amsterdam (1955 graduate, 1960 promotion).  He first taught political science at Amsterdam University and became Assistant at the Institute of Social Studies in the Hague (1958-1963). In 1963 he was appointed Professor in Political Science in the Faculty of Law and in 1969 in the Faculty of Social and Behavioural Sciences of Leiden University.  There, he founded the Institute of Political Science.

As a young scholar he enjoyed contact with political scientists of great reputation.  In the ‘50s and ‘60s he held visiting positions and fellowships in London at the LSE, and in the US at Harvard, Berkeley and Stanford’s Center for Advanced Study in the Behavioral Sciences.  There he met people like Carl Friedrich, Robert McKenzie, Michael Oakshott and Samuel Finer, and became part of an international network of exceedingly gifted young scholars, including among others Stanley Hoffmann, Otto Kirchheimer, Stein Rokkan, Val Lorwin, Warren Miller, Sidney Verba and Robert Dahl. This network shaped his early international orientation.

As the founder of Leiden University’s Institute of Political Science, he played a crucial role in the development of the discipline in the Netherlands and Europe, leaving an imprint on Dutch and Comparative Political Science in general, and on the Leiden Institute in particular. He contributed enormously to open up the field of comparative politics by putting not only the Netherlands, but also all other European ‘small countries’ on the map of the discipline.

Hans Daalder belonged to that generation of post-war political scientists that combined and merged classical European political science with the new American empirical tradition and contributed to rebuild a European international scientific community. Though he understood the inevitability of political science specialization, as he had seen it coming in the USA, he remained committed to an eclectic and multidisciplinary approach where history and law weighed heavily on the study of politics.

It is therefore not surprising that after his retirement he devoted his energies to writing a voluminous biography of Willem Drees, prime minister of the Netherlands in the crucial post-war years. But his interest in (political) history runs like a thread throughout his work and publications since the beginning of his career. Though he is recognised as one of the founding fathers of comparative work on democratic stability in divided societies – by now labelled ‘consociational democracy’ – the differences with Arend Lijphart always resided in his special eye for historical detail as opposed to the more abstract modelling of the latter, and in his tendency to see the Dutch pacification democracy as rooted in deep historical traditions rather than in specific elite choices.

Hans Daalder was—often as initiator—tirelessly involved in the creation of various programs, institutes, organizations and journals in his field and particularly for the advancement of comparative European research. In these efforts, in addition to his intellect and incomparable memory, he manifested great  organizational skills and an attention to detail characteristic of all of his endeavours.  He stood at the cradle of the Association of Dutch political scientists and was one of the founders of the journal Acta Politica in 1965. He was co-founder of the European Consortium for Political Research in 1970 and served as its chairman from 1976 to 1979. He also served as member of the Royal Netherlands Academy of Arts and Sciences.

When he came to the nascent EUI in 1976, at the age of 48, Hans Daalder was an internationally renowned scholar, a leading political scientist and an established figure as an ‘institution builder’.  As part of the pool of the first eight professors that constituted the entire academic community of the Institute, he took charge of setting up the PhD Programme, the only large-scale European PhD programme at that time in Europe. He was the first Head of the SPS Department and served for three consecutive years in that position, shaping the early departmental structure and setting the main guidelines for what became the Political and Social Sciences doctoral programme, set at the cross-roads of the European and American experiences.

Those of us who were present during those enthusiastic foundational years will recall his relentless efforts to set up a coherent programme in the difficult days in which the department grew from two to four professors. To offset the limits of such a small faculty, he brought to Florence all the best scholars of the time as part-time professors, including Robert Dahl, Stein Rokkan, Samuel Finer, Giuseppe Di Palma, Warren Miller, Morgens Pederson, Giovanni Sartori, Arend Lijphart , Juan Linz, and Richard Rose, transforming our ‘micro faculty’ into a fantastic intellectual environment. Thanks to these efforts we were ‘bounded in the nutshell’ of a peripheral city, within an unknown university, and with a tiny faculty, but we could count ourselves as ‘kings of infinite space.’  Another of his legacies was the first EUI summer school in ‘Comparative Politics’, the first of many similar summer schools at the Institute,  attended in the following years by some of the most promising young European scholars who would go on to become established professors across the continent and in the US.

Hans was an inspiring teacher and a mentor for many students from the Netherlands and abroad. He taught to me an unforgettable lesson: you teach more what you are than what you know.