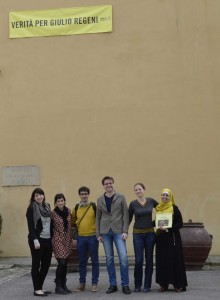 On Tuesday afternoon, researchers and staff gathered at the buildings of the EUI to unveil banners in support of Guilio Regeni, the Italian Cambridge University PhD student who was killed in Egypt in February. Regeni had been undertaking academic research for his dissertation into Egyptian labour unions, and tragically was found dead on 3 February in the outskirts of Cairo, around a week after his unexplained disappearance from that city.

The initiative was launched by a group of EUI researchers to join international calls demanding truth about Regeni’s murder. The group collected 223 signatures from the EUI community on a petition to display four Amnesty International banners demanding ‘Verità per Giulio Regeni’ (Truth for Giulio Regeni.)  The banners were hung at the Badia, Villa la Fonte, Villa Schifanoia, and Villa San Paolo.

Speaking to EUI Life, a spokesperson for the group explains, “As researchers, we felt a moral duty to join the campaign, launched by Amnesty International, to demand justice and truth for Giulio Regeni. By hanging the banners at the EUI, we want to state that, as human beings, we side with these whose human rights are violated. As academics, we are calling for freedom of research.”

EUI Secretary-General Vincenzo Schioppa Narrante was present at the Badia gathering to mark the occasion, and to show the support of the EUI in the search for truth.