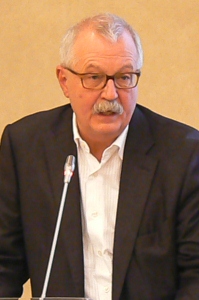 Despite theories predicting its marginalisation, religion remains a significant force around the globe, according to Professor Martin Riesebrodt.

In the January Max Weber lecture, Professor Riesebrodt of the Graduate Institute in Geneva, argued theorists had greatly exaggerated the extent and rise of secularisation.

Proponents point to increasing numbers of people who no longer identify as belonging to a religion, up from 3 percent to 20 per cent in the US over the last decades. “I find this less convincing…since the number shows that after 200 years of secularization still 80% belong to a religion.”

In fact Riesebrodt argued religion has if anything, been in resurgence since the 1970s, citing the Islamic Revolution in Iran and Ronald Reagan’s election with the support of politicized religious groups. Europe, often seen as the world’s most secular region, saw the heavy involvement of the Catholic Church in challenging the Communist State in Poland and the splintering of Yugoslavia along religious lines.

Even in today’s Europe no state can claim to be truly secular, Riesebrodt claimed. France gives government support to the restorations of churches, in the UK bishops sit in the House of Lords and in Germany the two biggest employers are the social services of the Catholic and Lutheran churches.

“If secularism is understood as the neutrality of the state vis-à-vis all religious associations and creeds and their equal treatment, most European countries are far from having realised this ideal,” said Riesebrodt.

While many government institutions seek to ensure the official spate of church and state at least in legislative terms, for individuals this often remains a blurred distinction.

“They believe in medicine but also bring offerings to a temple and pray,” said Riesebrodt.

“Secularization theorists have exaggerated the extent to which institutional differentiation and disenchantment have actually taken place in Western societies.”

Riesebrodt argues that the extent to which secularism is held perceived as benign, progressive and inevitable has been overplayed by theorists: “They made secularization prescriptive, treating it as a necessary historical step in order to reach the promised land of Western modernity.”

“[While] the Western experience with the secular state has often been quite positive, for example the enfranchisement of the working classes, women, or African Americans. Experiences of non-Western countries have often been much less benign, when one thinks of the abuses of Stalinism or military dictatorships in the Middle East, Africa, and Latin America.”

“This dialectic of secularization and religious resurgence is unlikely to disappear in the near future and in some countries it remains to be seen which side will gain the upper hand.”