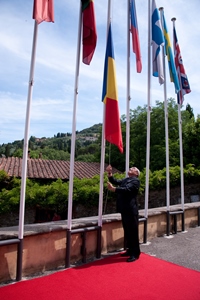 Romania has taken part in a meeting of the EUI High Council for the first time, becoming the  institute’s 21st member state.

The Romanian flag was raised during a ceremony at the Badia Fiesolana before a crowd of delegates, academics and university staff.

The entrance of Romania brings the EUI closer to its long term goal of 28 member states and opens the door to Romanian academics and researchers.