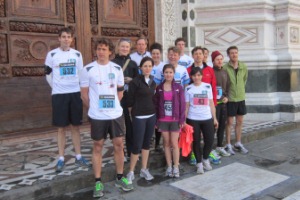 Fourteen of the EUI’s Running Club have taken part in Florence’s half marathon and 10km race.

Around 4,700 people ran through Florence on 7 April, either on the 21km race through the city centre, the 10km non-competitive race or the 1.5km route for children.

EUI researchers running benefited from the 4B scheme, granting a 50 per cent reimbursement on the entry fee. The Running Club also provides advice on the process of taking part in a race in Florence, including explaining the process of obtaining a medical certificate.

The half marathon marked the third and final competitive race of the academic year, following the September Corri la Vita and the marathon in November.

Between events the club – made up of researchers, fellows, professors and partners – organises informal runs around Florence. “The most important thing for the running club is that you have 60 people all organised in one email list, so you can hit the ‘reply all’ button and organise your own run,” says Cornelius Wiesener, a law researcher who has coordinated the club since 2011.

Although there are dozens of club members, training sessions usually involve up to six people. Running in Tuscany stands apart for its architecture and landscape, says Wiesener, as runners are able to take in the hills around Fiesole, Florence’s city centre and Cascine park.