Saskia Sassen and the incomplete city 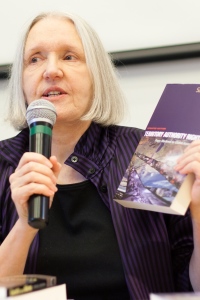 Saskia Sassen has given her honoris causa lecture on the subject of cities. The highly influential author and sociologist has told an audience of researchers and academics at the EUI that she has “de-theorised to re-theorise” in order to better understand modern urban environments.

Sassen asserted that cites are “complex but incomplete systems” and is now on a mission to charge our perception of urban areas, telling her audience “I want to destabilise the meaning of the city.” Speaking to EUI Life, Professor Sassen explained that “densely built up terrain is not necessarily a city – it may be an office park with endless rows of high rise office buildings – that is neither complex nor incomplete: that is simple and closed, and in that sense is not a city.”

During her lecture Sassen evoked an unseen trend to explain what the modern city meant to those who had recently found themselves in urban areas. By analysing public data on the IMF website, the visiting author and academic has explored a “land grab” by the big western banks in the years leading up to the global economic crisis. (2006-2007) Sassen claims that the banks acquired large tracts of rural land, particularly in China. This happened partly because, as Sassen puts it, “finance has to invade other space, now it’s at the bottom of the barrel.” But according to the Professor, this investment accelerated a dramatic rural exodus.

The land purchased by the banks was used to grow industrial crops like palm oil. Uses of chemicals to control these industrial crops are under-regulated because the produce isn’t consumed as food. Unchecked, these chemicals can make much of the surrounding farmland unworkable and this is what has pushed millions of people away from the rural communities they grew up in and towards urban areas. The farmers who could no longer cultivate food crops moved themselves and their families into the cities. We have witnessed a mass movement of people towards densely populated settlements but this has been entirely by choice. Sassen summarised this trend and other examples of economic displacement across the globe by saying “the city is the last place you can put your body down.” She later elaborated for EUI Life, saying:

What I am getting at is that the increasing privatizing of rural space… squashing the world of small farmers. This has the effect of expelling millions of people from their small farms or plots in a context where large plantation agriculture emerges, or mining. Where do they go? Our large cities are still a space where there is a sort of indeterminate space, little non-man’s zones, where those who have little can literally occupy it with their shacks or their bodies. Nowadays the city is increasingly hospitable to the homeless than rural areas dominated by large plantations and country estates.

It is a powerful counter argument to the fashionable idea that suggests the recent mass movement of people into cites was one of self-determination and ambition.

The lecture was given as part of the conference on Agon and Agorà: Politics and Political Community in the City and was delivered at the Badia Fiesolana on eve of Sassen’s awarding of a Doctorem Honoris Causa degree from the EUI.

Saskia Sassen was born in Buenos Aires and attended universities in France and Italy before becoming a post-doctoral fellow at Harvard. She now teaches sociology at Columbia University. Her latest book, Expulsions – Brutality and Complexity in the Global Economy, was published in May and examines the economic and financial complexities that prevent those who benefit from inequalities from feeling responsible for their global consequences.