Sean Loughlin is an alumnus of the 1982 cohort of the SPS department. He is Research Fellow at Blackfriars Hall, Oxford;  Emeritus Fellow, St Edmund’s College, Cambridge and Emeritus Professor, Cardiff University, Wales. 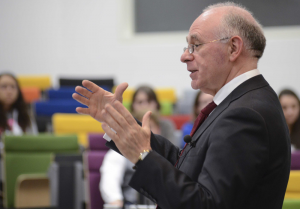 I arrived in Florence in 1982 having studied French and Politics in what was then the Ulster Polytechnic (now the University of Ulster). My undergraduate dissertation was on Corsican nationalism and the EUI was attractive as place to pursue a doctorate on this topic not least because Vincent Wright and Yves Mény were professors there. Vincent was a great expert on French politics, albeit a convinced Jacobin, and Yves was an expert on both French politics and regions. Besides these two great scholars, Florence itself was attractive so I turned down offers at the LSE, Hull (where Jack Hayward was Professor of Politics) and Ulster to head south (it was a difficult choice between Hull and Florence!).

In 1982, the Institute had been open only for six years and was still establishing itself. All the departments were in the Badia and there was no purpose built accommodation. Over the next couple of years new living accommodation was built and the EUI began to accumulate villas around Fiesole. I was enthralled to be there. The small scale and intimacy of the student community of around 125 students from the 15 member states was very congenial – as was the wine and other alcoholic beverages we Northerners discovered and liked a lot in the well-named Bar Fiasco.

Although the EUI still hadn’t decided whether it was to be a European ENA, a research centre, or a university graduate school, and the training programmes were pretty rudimentary (in fact almost non-existent), still, one was surrounded by many talented professors and students. Besides my own supervisors in SPS we had Philippe Schmitter, Ian Budge, Jean Blondel and junior professors Stefano Bartolini and Peter Mair who later became the senior professors. Famous academics always seemed to be passing through – Jurgen Habermas, Karl Deutsch, Michel Crozier, and Giovanni Sartori are names that stand out. One could meet them to discuss one’s work. Some of the students went on to great things: Donatella della Porta, Volker Schneider, Bruno de Witte all became professors, Renaud Dehousse went to Paris and is returning as EUI president (well done Renaud!), Martin Westlake attained high position in the EU, and many others. One is very privileged to have known these friends and colleagues.

More than a Europeanist

But perhaps the most valuable aspect of going to the EUI is that one becomes a European rather than simply a Europeanist. At least that has been my experience. Being a native English-speaker (although I’m Irish) means that one can so easily miss the rich cultural and linguistic diversity that is Europe as almost all educated Europeans today speak English. The obligation to learn another language – in my case French and Italian – forces one to open up to these wider and deeper dimensions of Europe. The EUI is a melting pot, not just of languages but also of cultures, including academic cultures. In the 1980s, globalization still hadn’t advanced so far as to obliterate this diversity and it was fascinating to observe at first hand how Germans, French, Italians, Dutch and British all tackled academic life in their own distinctive ways. In my own academic work I went on from a case study of Corsica to research the wider dimensions of regionalism and then of European state traditions. Becoming a European rather than just a Europeanist equipped me to work in several countries – Ireland and Britain of course, but also France, the Netherlands, Sweden, Spain and Belgium where I have spent more or less long periods of time.

On the personal level, I met my future wife Susan Baker who was a student at the EUI and we produced a wonderful daughter. Niamh, now 25, continues the European tradition. When she was 11 we sent her to the Ecole Française de Florence for a year. Then she studied German and Philosophy at King’s College London and at the Ludwig Maximilian University in Munich. Afterwards came an MA in European Politics at the College of Europe in Bruges (where Jorg Monar, another EUI alumnus, is director). At this moment – 21 June 2016 – Niamh and I are working hard to convince the Brits to vote Remain in the referendum in two days time. By the time you read you will know if we have been successful!