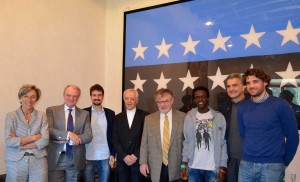 The doors of the EUI community have opened a little bit wider, with the signing of a unique agreement between the Institute, Caritas and Fiesole’s Cathedral Chapter to participate in the hosting and integration of six refugees.

The desire to ‘do something’ for refugees has been at the heart of several voluntary initiatives at the EUI since last summer.  According to Elie Michel, one of the volunteers involved in these initiatives, several individuals and groups of researchers have worked with the local Caritas organization and others to collect clothing, offer language classes, and help integrate refugees socially and culturally through sports and other activities.  ‘There is a substantial number of people at the EUI who could not accept to stand by while people were drowning every day and the hosting infrastructure was in crisis,’ he states.

In parallel, Kathinka España, Director of the Real Estate and Facility Service, inspired by the 6 September Angelus of Pope Francesco calling on parishes and religious communities to take in refugees, asked why the EUI could not do the same.  ‘We have the infrastructure, the opportunities, and the type of multicultural atmosphere which could really benefit someone trying to start a life in Europe,’ she says.  ‘I proposed it to President Weiler, and he agreed, immediately.’

The agreement, the fruit of months of dialogue, will allow for the hosting of six refugees in two apartments located in the Badia, made available by the Cathedral Chapter of Fiesole.  Caritas, which is the main provider of services to refugees in the area, will identify the participants and follow them from a legal and bureaucratic point of view.

‘The idea is to give them a soft landing, and for the EUI to help them use this time in “limbo” to integrate socially and develop what is necessary to make a life here—language, work skills, cultural awareness–in a context radically different from the places they are coming from,’ says España.  ‘We want to offer them 360 degrees of assistance’, she says.  ‘If the initiative is successful it could be an example for other entities—universities, businesses, and so on.’

The EUI community will be invited to learn more about the project, and how it might get involved, in a Town Hall meeting which will be scheduled and announced as soon as possible.

Both researchers and administrators are hopeful for the success of the initiative, not only in terms of what it offers to the refugees, but also to the EUI Community.  ‘A shared humanitarian project can strengthen ties among the community at all levels’, states España.  Michel echoes her sentiment, explaining ‘by opening the doors of the EUI, and getting so many people involved…we are certainly making the EUI a better place for those who work there.’