Villa Salviati in the evening sunshine

Villa Salviati provided the perfect setting for this year’s State of the Staff. The event, generously organised by a dozen members of the staff, overcame the EUI’s geographical limitations and dispersed villas to bring administrative staff, research associates, retired colleagues, external collaborators and trainees together, in the warm sunlight of a summer evening.

On a day-to-day basis, the diverse skills of every staff member come together to keep the Institute running smoothly. Yet as the State of the Staff 2017 revealed, many of those working behind the EUI scenes also have hidden talents. Early in the evening, Law researcher Daniela Alaattinoğlu and ICT Service Director David Scott provided a beautiful soundtrack as staff tucked into a buffet of homemade dishes. ‘I would like to emphasize the commitment of all our hard-working colleagues. We would be lost without them,’ said organiser Antonio Corretto (Language Centre). ‘Speaking of getting lost, we really want to track down the woman who brought a bottle of grappa hidden in a beer bottle!’ he said.

Yet staff truly showed off their culinary prowess at SOS this year in the ‘Neuro Masterchef’ competition. Kathinka España (Real Estate and Facilities Service), Thomas Bourke (Library) and Martin Legner (ICT Service) donned a magnificent trio of hats to judge the primi, secondi and dolci. In the end the creative talents of Giorgio Giamberini, Graphic Designer at the Robert Schuman Centre, produced the pièce de résistance. ‘I’m just happy everyone tried my cooking,’ he said, modestly. 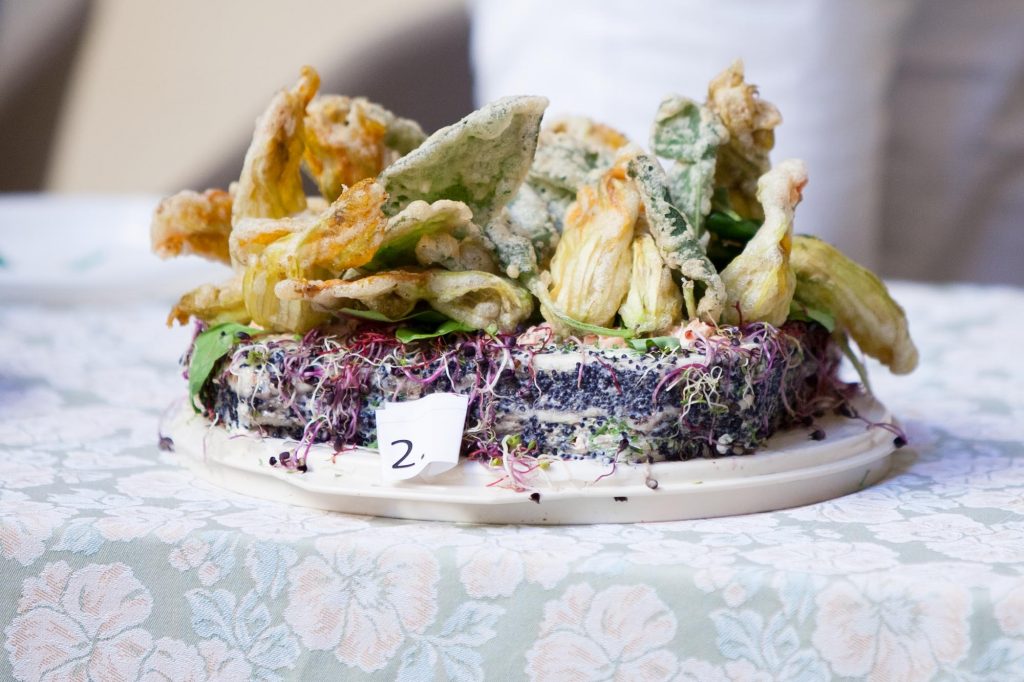 One of the Masterchef creations

Outside, events became even more heated as four teams competed in an EUI edition of the old TV game show, ‘Jeux Sans Frontieres’. Laura Bechi (REFS) miked up with a vintage-looking headset to direct a series of high-octane contests. A fierce competition between four teams from across the EUI ensued, but in the end i gialli claimed the title of ‘Jeux sans frontieres’ champions.  ‘Our victory was well deserved’ declared Communications Service Administrative Assistant Alessio Lapucci, with a wink. ‘It was a wonderful experience of bonding and connecting with my colleagues,’ added his teammate Anny Bremner, Coordinator at the Academy of European Law. ‘So much fun to bring out our playful side!’

Partners, spouses, children and grandchildren of EUI staff were also welcome at the event. In the evening sunshine, entertainers amused children – big and small – with giant bubbles and balloon animals. Yet the evening had something for everyone, ending with a magnificent performance by Animae Voces, the choir of  IT User Support Officer Tommaso Gambassi. ‘It was wonderful,’ said Caterina Guidi, Research Associate at the Global Governance Programme. ‘They even sang my favourite song – Dolce Nera!’

SOS is a chance to relax with colleagues, family and friends

As another academic year races towards its conclusion, the annual SOS once again offered a little light relief for the hardworking staff of the EUI. ‘It’s a great party, and the organisers have become a great team over the years,’ Antonio Corretto told EUI Life. ‘I want to point out everyone’s contributions, though, including the people who brought things for everyone to eat and drink,’ he said.  ‘It’s a lot to organise, but it’s great fun,’ Laura Bechi agreed, removing her microphone after a long day. ‘And when your colleagues come to thank you, it’s really worth it.’

See the fun and games for yourself, in the full photo album from SOS 2017.