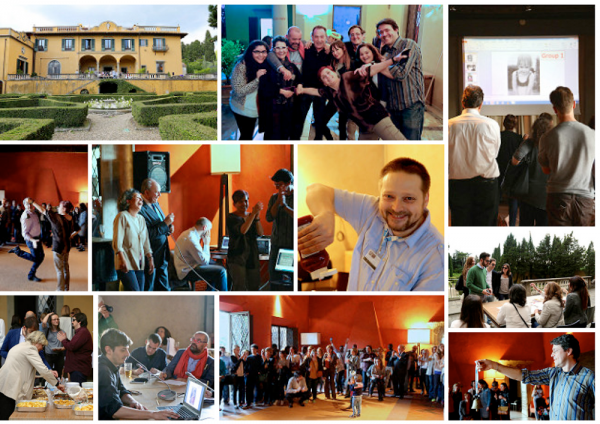 Images from the SOS Party

That boy on the Vespa…did he know he’d eventually arrive in Florence via South Africa?  And that sixish-year old, with the missing front teeth and the canny smile, who would have placed him singing ‘Nights in White Satin’ on a warm spring evening on the steps of an Italian villa…to his staff?  But that girl spinning out on her orange tricycle…chin up, gazing straight at you…there’s something vaguely familiar…maybe you’ve seen that same look around…Villa Salviati??

Around 250 administrative staff members, research associates, trainees, external staff and retirees, partners, spouses, children and grandchildren turned out for the annual ‘State of the Staff’ party at Villa Schifanoia.  A play on ‘State of the Union’ and ‘S-O-S’, concepts which resonate deeply for many staff members, the idea for the event grew out of a discussion on staff well-being three years ago between the EUI Staff Committee and President J.H.H. Weiler. As Michael Goerke, Chairman of the Staff Committee explains, it is aimed at ‘overcoming the geographic and mental barriers’ that divide the staff due to service and departmental distinctions and the spatial dispersion across 14 buildings.

While putting faces to the names relentlessly appearing in our email boxes is a regularly mentioned advantage of the event, this year presented a few novelties, including a contest matching staff baby pictures with their current aspect (Indovina Chi?), and  ‘Musichiere’, a name-that-tune type of game.   Martin Legner and Luca di Rocco shared the prize for ‘Indovina chi?’ and Ognjen Aleksic, supported by a team of several colleagues, including M. Blokiau, A. del Castillo, L. di Rocco, Raul Pessoa and other “voices”, came out on top in the musical competition.  The winners may claim a guided tour by Laura Bechi of any art venue in Florence.

Elizabeth Elizondo Villareal, a Communications Service trainee, was enthusiastic about the karaoke in the Sala Bandiere, especially the African drumming and singing. ‘Everyone was dancing’, she said, ‘it was a quintessential EUI moment–international, a celebration of being open to all different cultures, fun.’

Elena Torta, Communications Specialist at the RSCAS and new arrival at the EUI, appreciated the chance to meet new colleagues and complimented the organizers, mentioning that it was ‘very well organized with lots of food, drinks and animation for the kids. People enjoyed it.’

Sarah Simonsen, who recently relocated from the Max Weber Programme to the Economics Department concurred, adding ‘the kids had fun and it was super well organized. I especially found the “guess who it is” game with the childhood photos a fun idea. It’s a great occasion to see your colleagues in a different setting to talk about both work and private stuff, and is good for community building.’