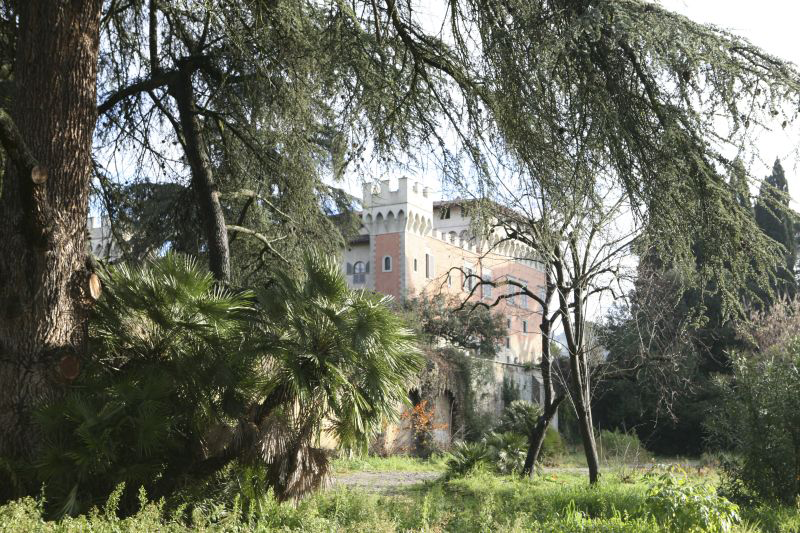 Villa Salviati, prior to restoration of gardens

It was New Year’s Eve, 1638. A dark and stormy night, no doubt. Certainly, the time for an evening passeggiata was long past. Yet four men walked with purpose down Via dei Pilastri, in the centre of Florence. At the door of number 4, one of the men raised his hand and knocked.

Inside, Caterina Brogi had spent the evening with her maid. Caterina was young and beautiful. She had been married to a man named Carnacci, who was more than twice her age and had three sons older than she was herself. The marriage proved to be miserable, and eventually Caterina’s husband allowed her to live in a house of her own. The young woman made the most of her second chance at happiness, and socialised widely in the city. Until one day she met a handsome duke, and she fell in love.

Jacopo Salviati liked women, except his wife. And women, except his wife, liked him. The marriage of Jacopo and Veronica Cibo had never been a success. Veronica Cibo, so history recalls, was ugly, bitter and bad tempered. Meanwhile Jacopo is said to have been handsome, cultured and kind. Yet the duke was a womaniser. He was indifferent to his wife but he liked young, beautiful and obliging women. So he liked Caterina Brogi and he visited her often in Via dei Pilastri. When Veronica discovered the identity of her husband’s lover, her fury at Jacopo’s indifference was concentrated into a murderous rage against young Caterina. And so, from her home in Villa Salviati, Veronica plotted her revenge.

Bartolomeo Carnacci had never liked his father’s wife and feared losing his inheritance. So when Veronica Cibo asked if Bartolomeo could assist in her deed, he was more than happy to oblige. And so it was Bartolomeo who knocked on the door of Via die Pilastri 4 on that fateful night. Caterina’s maid Maria recognised Bartolomeo and opened the door to let the young Carnacci in. He was family, after all. Maria died in the doorway. Her throat was slit as the three assassins burst into the house. Caterina heard a commotion but, alone and unarmed, there was little she could do. The men raced upstairs in search of their target and, finding Caterina in her bedroom, killed her by a blow to the head. But the assassins’ work was not yet done. Poor Caterina’s body was cut to pieces. The murderers threw her remains down a well near the Arno and then, bearing gruesome proof that the deed was done, fled the city to Villa Salviati.

When Jacopo awoke on New Year’s Day 1639, his wife had left him a gift. In a basket of linen, beneath his shirts, Jacopo discovered the gory, decapitated head of his lover. Veronica was swiftly banished from Salviati and, in time, the assassins were identified. But only Bartolomeo was punished for the crime. He too lost his head.

It is said that Caterina walks the halls of Salviati, unable to find peace. In recent weeks, EUI staff who work through the night have spoken of slamming doors and strange noises. One guard who patrols the villa by night told EUI Life of his ghostly encounter. ‘It was 4am, and I was patrolling the villa,’ he said. ‘When I reached the old ballroom, now the social room, I heard the voices of two women with strong Florentine accents.’ There was nobody there, but the voices echoed around the cavernous space. Perhaps it is the ghost of Caterina, seeking revenge for her brutal murder. (Or perhaps the voices are those of the two women in the tale, discussing how ghost stories always cast women as helpless victims or wicked murderesses because of a patriarchal fear of female power.)

In any case, there are few clean hands in the bloody history of Villa Salviati. And if you find yourself there as the witching hour approaches, remember that you might not be alone…

Thanks to Laura Bechi, the EUI’s resident expert on Villa Salviati, for her help.