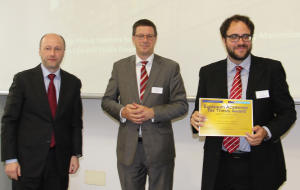 Ricardo’s thesis, La cuestión prejudicial y la fiscalidad directa, analyses how the European Court of Justice, working within the preliminary reference procedure (267 TFEU), deals with cases in the field of direct taxation. He also examines the meaning of judicial cooperation between the ECJ and national courts in this area.  The thesis is available in open access in the EUI research repository.

The European Academic Tax Thesis Award is a joint venture of the European Association of Tax Law Professors and the European Commission (Directorate General Taxation and Customs Union). As recipient of the prize, Ricardo has been invited to present his work to interested EU officials in Brussels.

Ricardo defended his thesis in LAW on 30 April 2015, under the supervision of Dr. Loïc Azoulai. He is now a post-doctoral research fellow at the International Bureau Fiscal Documentation (IBFD), an international tax research institute located in Amsterdam.