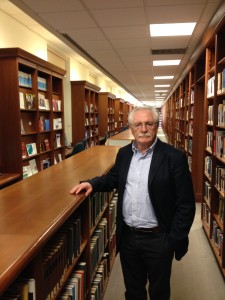 Since Tommaso Giordano started work at the EUI Library on the 1st of March 1983, his job has evolved exponentially. Over the last 31 years, the dissemination of information has changed more than at almost any time in human history and Giordano is now the Library’s director.  Today, a wander between the shelves reveals as many readers staring into laptops as there are reading books and much of the librarian’s old domain has been transformed by the digital revolution. “The role of the library” Giordano proclaims, “has to be reshaped. This process will be accelerated by the new generation.”

On the 31st of October Giordano will arrive for his last day of work at the EUI before embarking on a well-earned retirement. But how does he think the library will be perceived in the years to come? The accent of digitalised information presents new challenges that, at least for now, are beyond the abilities of search engines. After all, the culture of the internet is one of pace and experimentation and there is little appetite for heritage. Giordano is adamant that the 21st century library must be able to grapple with the growing mountains of digital material. “This is very important because now if you cite something, you might have to find it again in 10 years. In the digital environment this is more difficult at the moment because the industry doesn’t invest money to preserve it. I think libraries as a public establishment have a big role here.”

This, it seems will be the central challenge of the 21st century librarian, who will in effect become a kind of digital curator. Giordano knows that “with an explosion of information, it’s very difficult to select the right content.” Search engine algorithms have no preferences for accuracy or reliability and can often help bury obscure material.  Untapped resources may have been relegated to page 23 of a search, hidden under an ocean of unwanted pages that just so happen to have a similar name. Worse still, they might not even appear at all. Information neglected by Google could easily be overlooked by a generation of overstretched researchers. Giordano warns that without trained librarians dedicated to delving though the endless digital detritus of online publishing, highly relevant material could become untraceable.

Giordano has published his own work in the field of library sciences in different languages (i.e. Italian, English and Spanish) and became a leading figure in the transition of Italian libraries. When it comes to information, he’s surprisingly progressive for a man with a white moustache.  Notably, his office, near the book-stacks on the Library’s entrance floor, is itself devoid of any volumes. “For my scientific work, 90% of what I use is digital. I don’t use books. You can see,” he says, gesturing towards his redundant shelves, “I don’t have books here. Ten years ago these shelves were full of books.”

That isn’t to say that he’s given up on the classic dead tree delivery system and has his own library at home, “At work I use technology but in my own time I use traditional print”, he notes. When at home he enjoys reading modern literature and history, particularly the 15th and 16th century during the last information revolution when the printed word was in its ascendance; an era he says has “similarities with the digital era.”

Is he impressed by the interactive potential of new media? “I’m also on Twitter andLinkedIn, but only for work.  I consider myself an innovator but I also try to preserve my own habits. Why interact via Twitter and Facebook when I could interact in person?” In Giordano’s view social media and instant access to information can detract and distract from human relationships, something he takes quite seriously. “I don’t have GPS in my car because if I get lost I just ask other people for directions and sometimes I start conversations with them.” It’s this instinct that typifies his attitude towards the modern library. It seems like Google and services like it can tell you everything at an instant but they can also cause us to miss out on conversation and word of mouth, which has been a pivotal component of scholarly research for centuries. The EUI Library has over 850,000 items and would be pretty daunting without a team of experts at hand. So the advice he’s passing on to his (yet-to-be-chosen) successor is to focus primarily on people, “My recommendation is to look to the staff. It used to be that the collection was the important thing. We should consider human resources more important than technology. The staff is the main interface with users. We have to support them.”

Now that his work is almost done Giordano is planning an “agricultural” retirement, he has two granddaughters and leaves the EUI with an ambition to “cultivate my human relationships.” Return trips will be regular, and he has no plans to put an end to his research, much of which will likely involve the library. He says he will miss the cultural environment of the Badia and conversation he has with young people from around the world. “I try to stay in contact with the researchers via email” he says, before adding, “but if they add me on LinkedIn or Twitter I’ll refuse, I prefer direct contact.”