The History Department has announced that Valentina Marcella has been named the recipient of the James Kaye Memorial Prize for her thesis ‘Laughing Matters: Mainstream Political Cartoons under the Military Regime of the Early 1980s in Turkey’.  Valentina defended the thesis in December 2015, under the supervision of Professor Heinz-Gerhard Haupt. 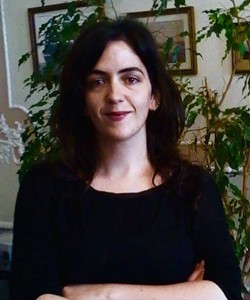 The biennial award, made possible through the generosity of James Kaye’s family and friends, recognizes the best EUI thesis combining the study of historical and visual sources.  Valentina, now a post-doctoral fellow at the Istanbul Studies Center, Kadir Has University, answered some questions about her thesis for EUI Life:

What drew you to incorporate the visual element into your historical analysis?

My research grew out of the question of if and how it was possible that a culture of dissent could exist in Turkey’s mainstream under the military regime of 1980 to 1983. I focused on the visual element in light of its political potential, since comics were more successful than written texts or performed arts at both denouncing the regime and evading censorship. My analysis approached the visual material that was produced and circulated under the regime as an active agent of political participation, able to convey the mood and experiences of civil society and, in so doing, to contest power. In other words, I considered images not only as historical records of crucial issues, but also as historical events that were deeply embedded in the military rule and that contributed to the political experience of those years in their own particular way.

Describe what your thesis teaches us about the use of humour in communicating a political message?

My thesis shows that humour, both within mainstream and underground publications, is able to pose significant challenges to power even in the contexts of authoritarian rule and censorship. The political strategies of dissent that are achieved through caricatures and cartoons are articulated through their contents, predictably, but also at the authorial level. In fact, by presenting itself as a popular art, graphic satire encourages amateur illustrators to circulate their work along with professional cartoonists. In this way, humour becomes a platform of political dialogue through which dissenting members of civil society communicate and reach a degree of consensus.

The James Kaye Memorial Prize will be awarded to Valentina at the EUI Conferring Ceremony on June 10.