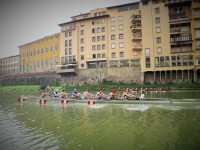 On Saturday 2 April, the 3rd edition of the annual De Gasperi-Schuman Cup took place on Florence’s Arno River in the resplendent spring sunshine.

The competition started in 2014 as an informal friendly competition between the EUI and the ESCP business school in Paris, hosted by the Societa Canottieri Firenze who usually also participate.

This year a male team came from the American University in Cairo for the first time. Speaking to EUI Life, EUI Rowing captain Matilda Greig declared that “hopefully it is a tradition to establish”. 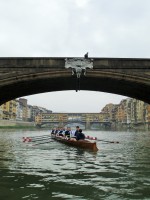 The competition comprised four events. In the Men’s 8+, victory was snatched by an impressive Egyptian team. The EUI team came 3rd out of 4, having won the race for third place even though one member of the crew managed to misplace their seat halfway through.

In the Men 4x (sculling) the EUI triumphed over teams from AUC, ESCP and the Canottieri in what was a dramatic last-second win when the opposing team caught a very large crab.

The Tuscan sun was clearly shining on the home team, and the EUI won again in the Mixed 8+, while in the Women’s 8+ a combined ‘Firenze’ team of female rowers from the EUI and the Canottieri won against a team from ESCP.

Medals were presented to victors by Veerle Deckmyn from the EUI’s Academic Service, alongside Cristiano Calussi, the president of the Canottieri.

Greig adds, “There was a great atmosphere on the boats and the banks, and between the teams, with lots of celebration at the end – including the coxes (and several coaches) ending up in the river.”