International Women’s Day at the EUI 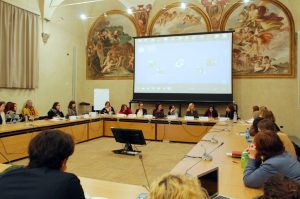 Participants in the ‘Women in Academia’ event share their experiences and discuss how to achieve gender parity in academia.

On 8 March, millions of women around the world gathered to commemorate International Women’s Day. Across the globe – from Bangladesh to Belarus – women gathered to shine a spotlight on the battle for gender equality, celebrate its successes, and protest its failings.

The European University Institute was no different and, in front of a packed house at the Badia’s Refettorio, the EUI community came together to debate the role of women in academia, discuss their shared experiences and debate the systemic obstacles that women still face when trying to pursue an academic career.

Marta Fraile Maldonado, Part-Time Professor in the SPS Department, spoke at length about the subtle gender bias that exists in the academic community. ‘It works through a multitude of everyday unconscious behaviours that lead to unequal treatment and unequal recognition,’ she said. ‘Recognition is the currency of our profession,’ she continued, stressing the need to fight for greater visibility for women in academia.

Jennifer Welsh, Professor and Chair in International Relations in the SPS Department, urged participants not to judge women for choices they have made, and to strive to ‘create an environment where other women feel safe to make their own choices.’

‘Don’t be too diplomatic,’ she said. ‘Stand up for the things you care about.’