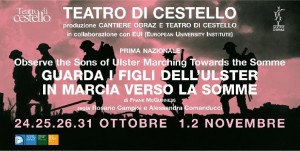 The Department History and Civilization and Robert Schuman Centre are inviting EUI members to attend a theatrical performance to mark the 100th anniversary of the outbreak of the Great War.

‘Observe the Sons of Ulster Marching Toward the Somme’ will play for the first time in Italy at the Teatro di Cestello.

Constructed of superimposed layers of historical memory that culminate in the Ulster Brigade’s punishing first day on the Somme, ‘Sons of Ulster’ shows how such bitter memories have helped to forge Northern Irish Unionist consciousness, and thus to shape Irish politics across the entire 20th century. McGuinness, a northern Irish Catholic, casts his ear beyond the religious gulf that divides his country, beyond the familiar cadences of his own Catholic culture and chooses to tell his story in the spare and unbending liturgical rhythms of the austere Calvinist religion that has shaped Ulster consciousness. By seeking to understand the history of the Great War as it played itself out across Ulster’s religious divide ‘Sons of Ulster’ has also been a key player in the very long peace process that has slowly dampened levels of conflict in the North since the play’s very first performances in the mid-1980s.

Performances are scheduled for the 24th, 25th, 26 and 31st of October. Then again on the 1st and 2nd of November. Tickets will be available to EUI researchers for €13.

The performance  on the 1st November will be accompanied by a panel featuring three prominent scholars of the First World War which will held prior to the performance. Speakers will include Roberto Bianchi, (Universitá di Firenze) Roy Foster (Oxford University) and Marco Mondini (Universitá di Padova).